A Mouth Full of Stones 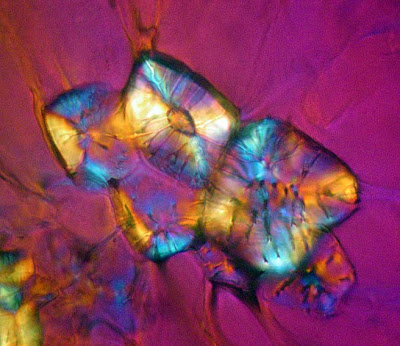 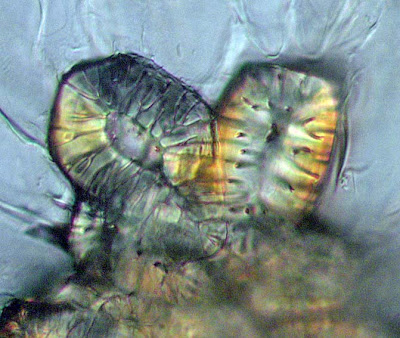 Pear stone cells, x400, interference contrast optics, showing the plasmodesmatal channels that connect one cell to the next. Notice the enormous thickness of the cell walls and the tiny internal cavity (lumen) that housed the cytoplasm of the cell when it was alive 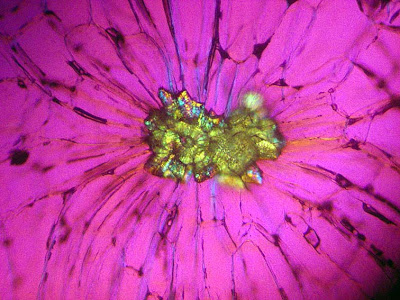 A cluster of pear stone cells - all dead - surrounded by thin-walled living cells of the succulent pear flesh, x100 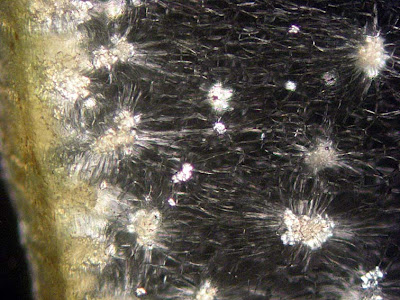 Clusters of stone cells in a thin section of the pear I ate for lunch. The green layer on the left is the skin of the fruit. x40. Dark field illumination. 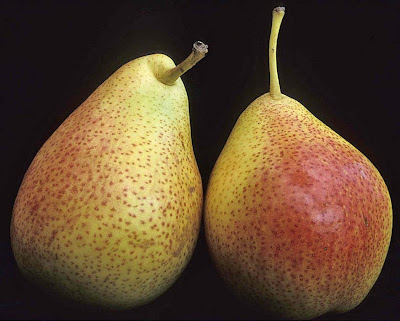 A nice pair of pears

There are two distinctive features of pear fruit that makes it instantly recognisable from the first mouthful – a wonderful flavour and those gritty little particles in the pear flesh that get stuck between your teeth. The particles are stone cells, technically known as sclereids, which are clusters of dead cells with amazingly thick walls. The second photograph from the bottom is a very thin section through a piece of the pear that I had for my lunch today – those bright clusters are the stone cells. Next up, a cluster of these cells at higher magnification, viewed with polarised light and revealing the interference colours created by their thick, birefringent walls. The top two photograpsh show the individual cells at much higher magnification – with polarised light (top) and using interference contrast optics (below). In each you can see the enormous thickness of the walls, perforated by the channels called plasmodesmata that connected the cytoplasm of one cell with that of the next when they were alive. The function of these stone cells is uncertain, but they might have something to do with water supply to the rosettes of thin-walled living cells around them that inflate as the fruit grows. Generally speaking, consumers prefer pears that aren’t gritty, so pear breeders try to produce varieties without too many stone cells.
Posted by Phil at 9:06 PM 6 comments:

The Wonder of Whiskers 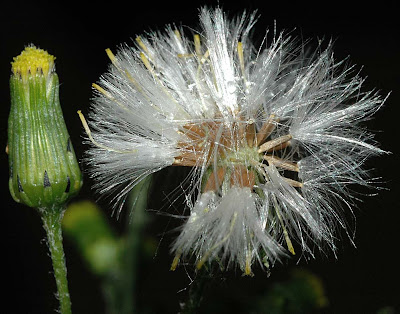 Groundsel flowers self-pollinate and run to seed with remarkable speed. Each seed is carried aloft on a parachute (pappus) of hairs...but there are other, much smaller hairs with a different function attached to the seed coat itself.... 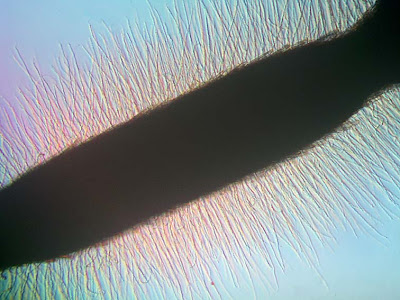 The seed coat also has a covering of microscopic hairs, far smaller that the parachute hairs, that rapidly extend outwards at right angles from the seed coat when it becomes wet. x40 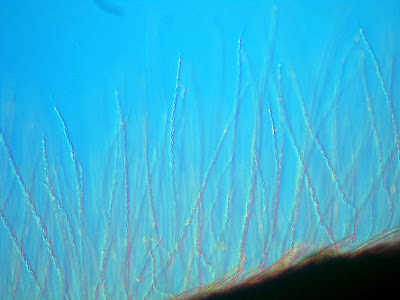 A single seed hair, magnified x400, using interference contrast microscopy that reveals hidden structures within the cell that the hair is formed from. Each hair is made up of a woven spiral column of threads, like a piece of string........or a water-absorbing wick?

Groundsel Senecio vulgaris is one of the most successful colonisers of cultivated land, thanks to its capacity to grow rapidly, flower quickly and disperse its seeds far and wide on tiny hairy parachutes that will carry them over large distances. But it has another winning adaptation for rapid invasion of ecological niches too, that I only noticed by accident recently. The Latin generic name of groundsel – Senecio – means ‘old man’ and alludes to its parachute of whiskery, silvery hairs that transport the seeds on the breeze. But, as I discovered yesterday, groundsel has a hidden complement of hairs that are invisible to the naked eye that have a quite different function: anchorage and water uptake. I’d put some groundsel seeds in a drop of water on a microscope slide, to photograph their parachute hairs, and was amazed to see a mass of writhing, much tinier hairs begin to extend from the coat of the seed, until hundreds were extended at right angles to the seed coat surface. When the seed is dry these are pressed so close to the seed coat that you don't notice them, but once it’s wetted they extend. What’s their function? Well, my guess is that they anchor the seed to a damp soil surface and then act as wicks, conducting water to the seed and speeding up germination. Notice how, at high magnification, each hair resembles a woven piece of string. Groundsel seeds germinate and establish themselves as seedlings incredibly quickly, and my guess is that this surface seed coating of ‘wicks’ is a crucial adaptation for helping airborne seeds that have landed on the soil surface to take up water and germinate as quickly as possible. 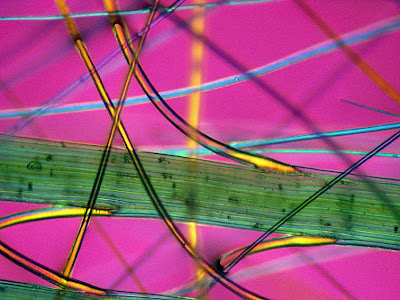 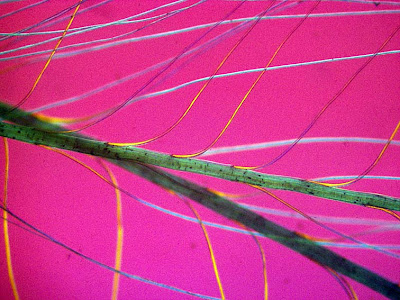 The single-celled side branches resemble the barbules of a feather 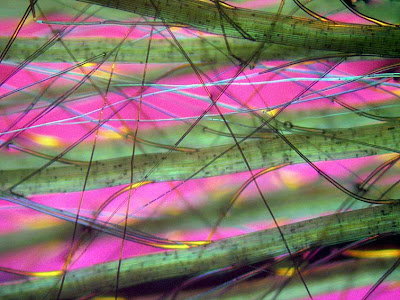 Fine, single-cells hairs grow from the branches and form a light, overlapping mesh 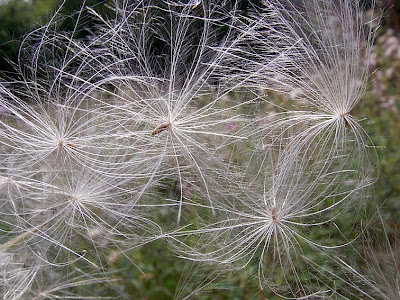 We’re entering the season when plants are on the move, in the guise of seeds carried in the guts of birds that have eaten fruits, or hooked into the fur of animals, or carried on the wind. Thistledown – the very evocation of lightness and aerial buoyancy – can carry seeds miles, tens of miles, maybe even hundreds of miles on the breeze. Plants may be rooted to the spot, but their propagules are some of our planet’s most mobile travellers. Last week I was standing on a hillside in Weardale over five hundred metres above sea level, watching a continuous stream of thistledown drift past, swept up by thermals from thistle seed heads in the pastures down in the valley below. Under the microscope the main branches of thistledown (in this case from spear thistle Cirsium vulgare) can be seen to be made up of multicellular arms that with long, single tubular cells branching off, like the individual barbs of a feather, to produce an overlapping mesh that is light enough to provide enough lift to carry a seed aloft on a thermal. The colours here have been generated by the use of polarised light microscopy. Double-click for larger images.
Posted by Phil at 8:04 PM 2 comments:

Inner Mysteries of a Midge Larva 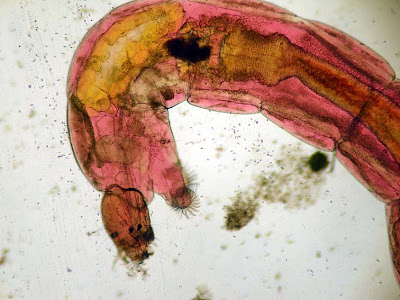 Small aquatic organisms - like this midge larva that came from the water butt outside my greenhouse - are conveniently transparent, so you can watch the internals workings of their bodies with amazing clarity under the microscope. The short video clip here shows a wave of muscular contraction driving food through this insect larva's gut.
Posted by Phil at 10:46 PM 3 comments: 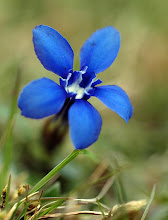 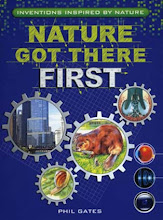